Types of Beams in Civil Engineering

Beams are the structural elements of any civil structure, especially buildings. They support the load acting on the overall structure and transfer it to columns. Beams are aligned horizontally within structures and can resist vertical forces, shear forces, and bending moments. The forces acting along them are transferred through their respective ends onto columns and walls and subsequently to foundations. Types of Beams in Civil Engineering

Beams constructed in civil engineering constructions are of numerous types and can be chosen based on the functional requirements that need to be fulfilled. They can be categorized based on certain criteria that are:

Based on Support Types

As the name suggests, simply supported beams are simple beams but also one of the most important types of beams. It is supported at both its ends, with one end pinned to a fulcrum and the other one either pinned or supported on rollers. Bothe the ends also have the freedom to rotate. 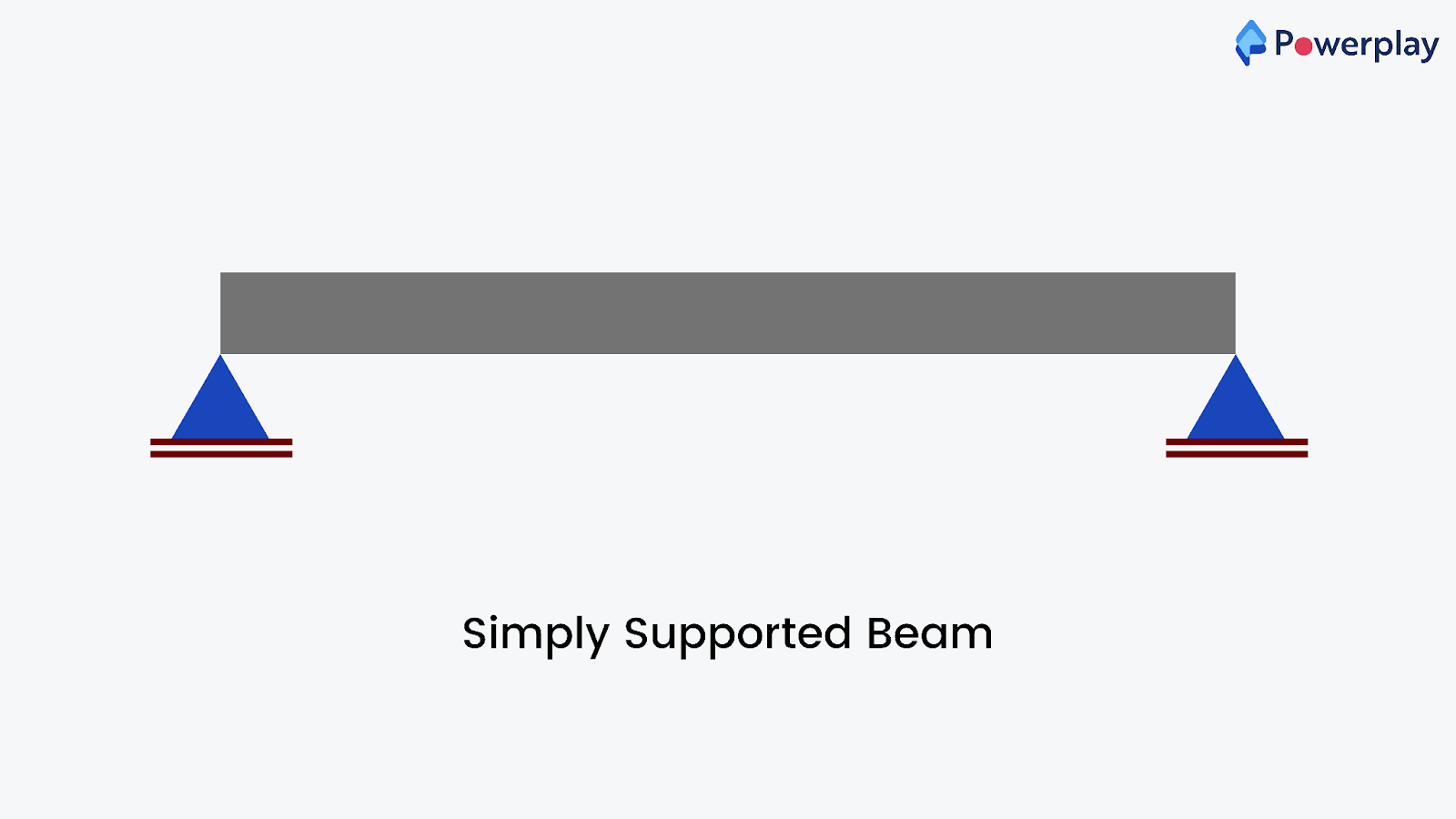 Simply supported beams can resist both bending and shearing stress acting on them. It can also experience a translational moment when roller supports are used at one of its ends.

The bending and shearing force acting on a simply supported beam depends on the type of loading acting on it.

Fixed beams are fixed at both ends and thus the rotational movement at these ends is completely restricted. Generally, beams that do not have any freedom to rotate at their ends are called fixed beams. 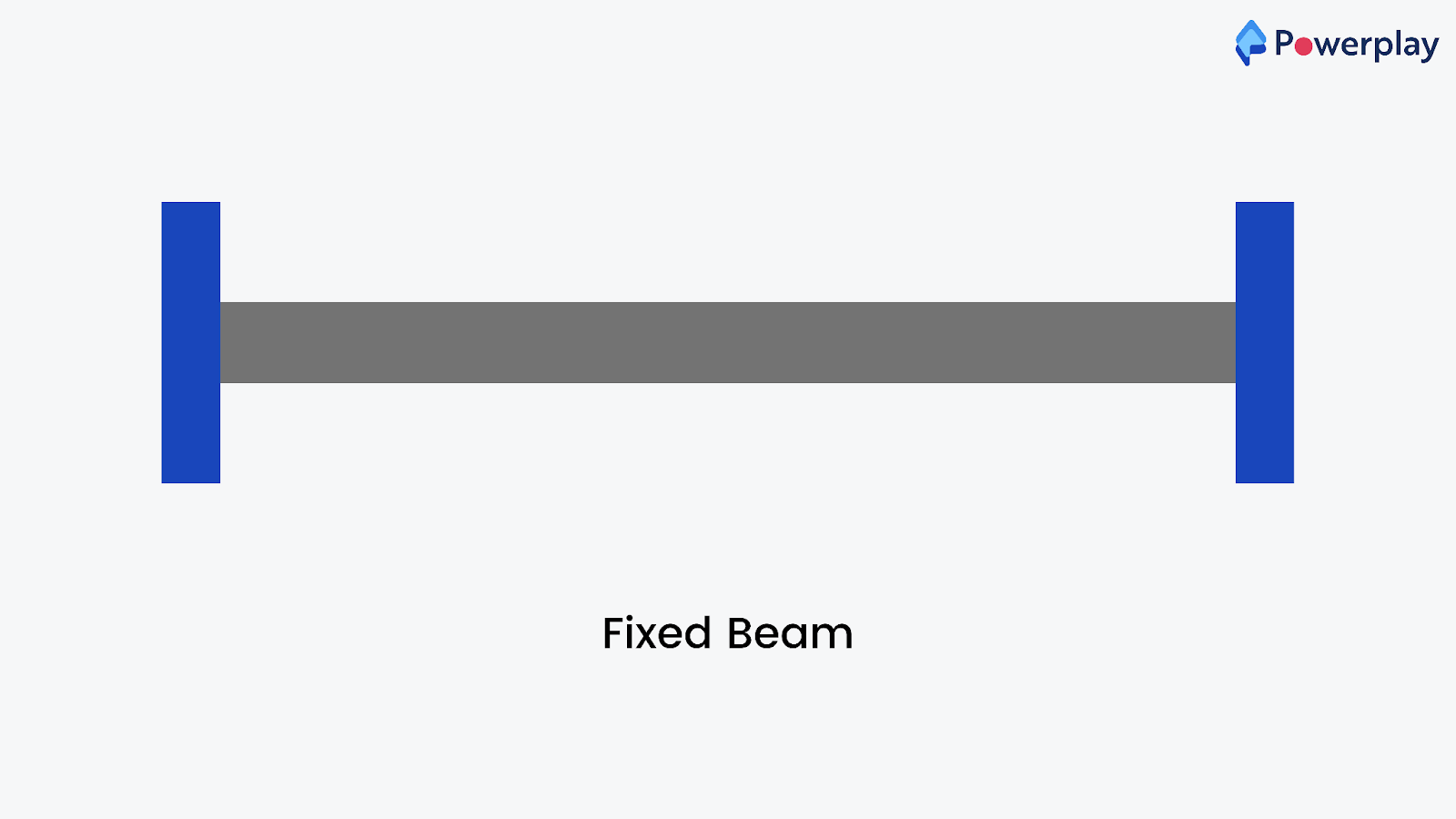 The ends of these types of beams are fixed with the help of reinforcements to restrain any rotation.

Most of the high-rise buildings are provided with fixed beams that are rigidly attached to intermediate columns or beams.

A cantilever beam is a type of beam which is fixed at one end and free at the other. Simply put, a beam that hangs free in the air with one of its ends fixed is called a Cantilever beam. 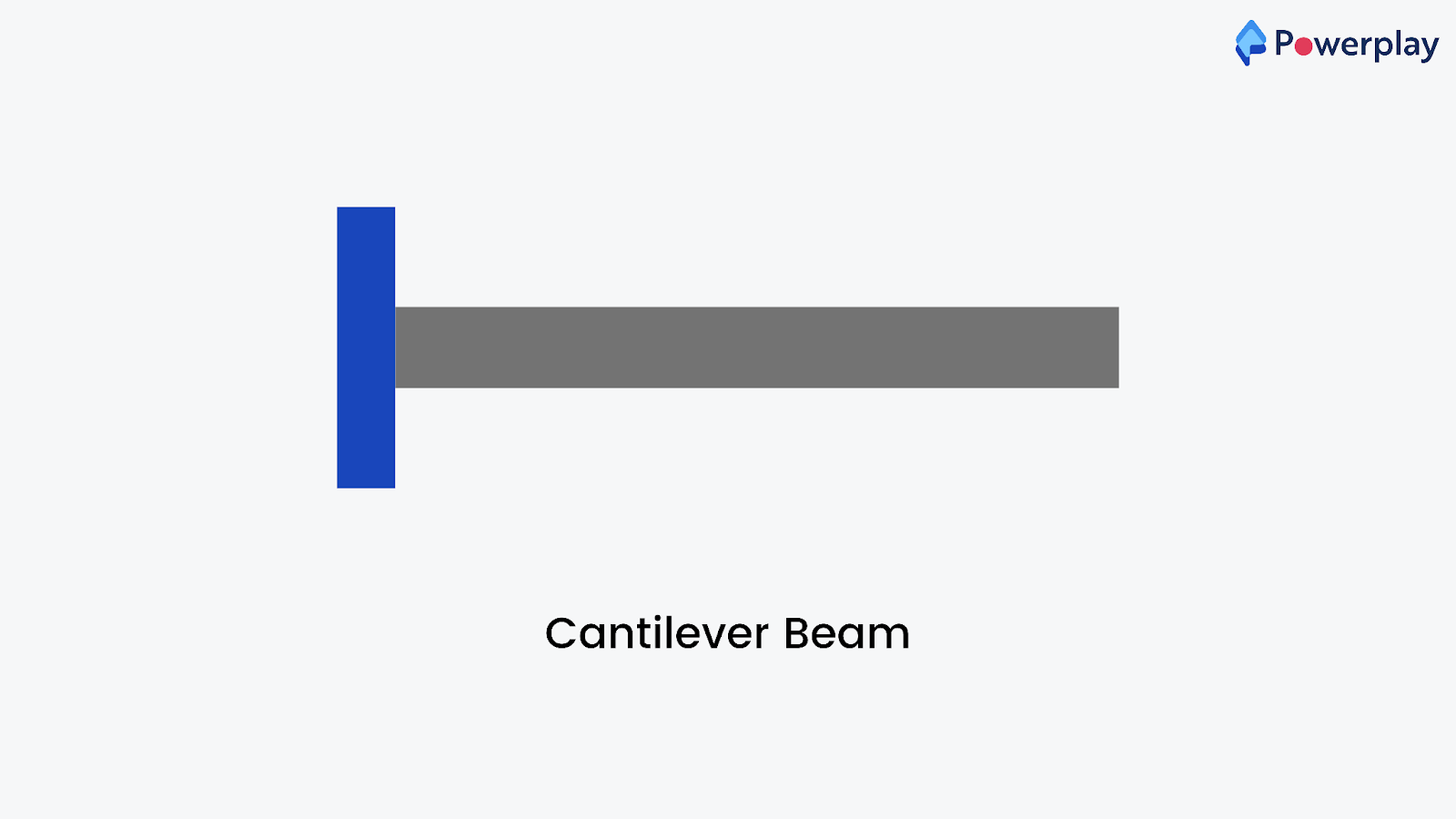 The load acting on these types of beams is transferred to the supporting end which resists them as fixed-end moments and shear stress.

The free end of a fixed beam is free to move or rotate but the fixed end is not which is why they are mainly used in car parking areas, towers, bridges, etc. 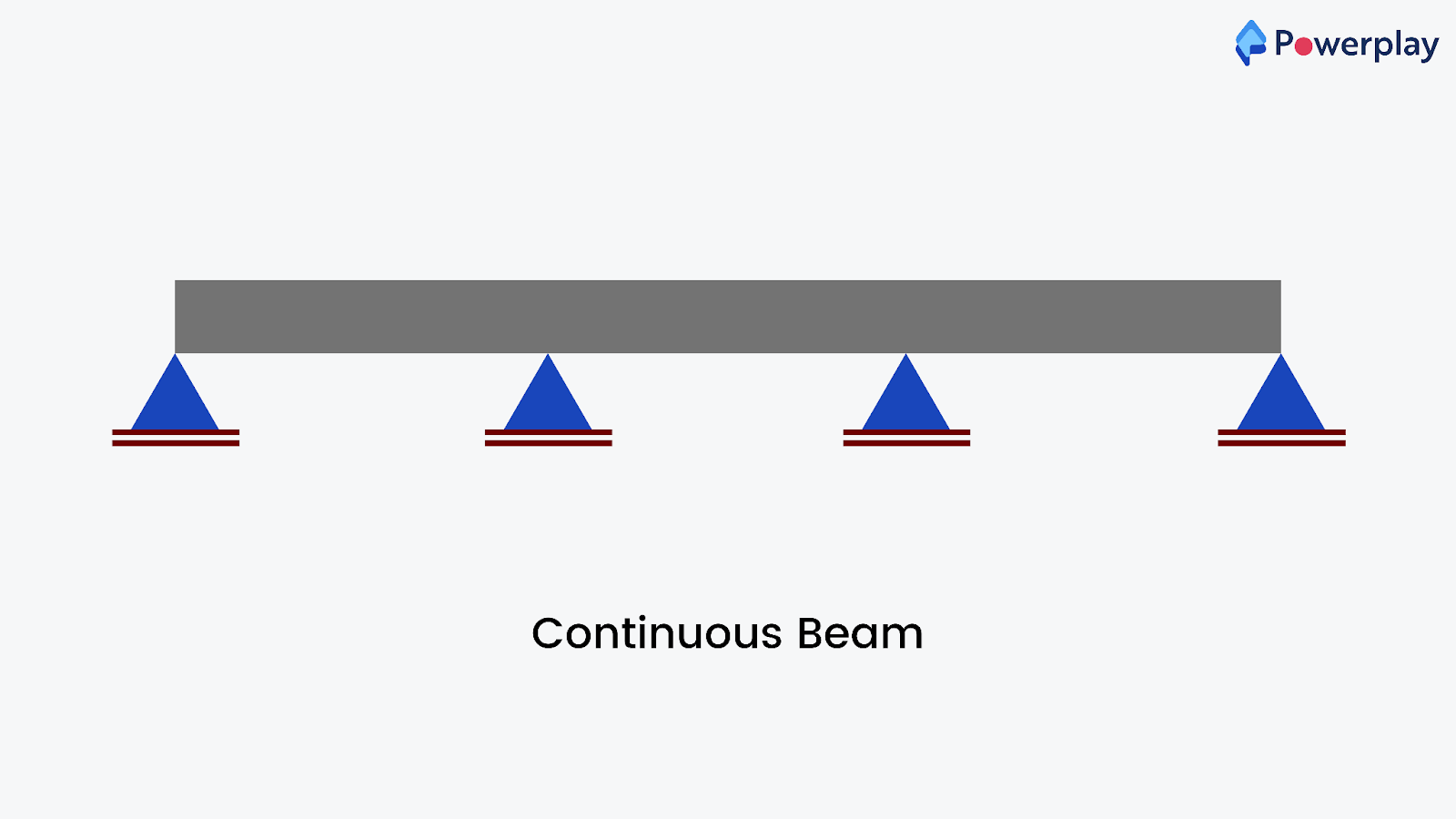 Clearly, there is more than one span and can be usually seen in bridge structures because the maximum positive bending moment occurring along its length is less as compared to simply supported beams.

An overhanging beam can be considered as a simply supported beam one of whose ends extends further up to some length and hang free in the air. One of the ends of the beam is either pinned or fixed to a support. 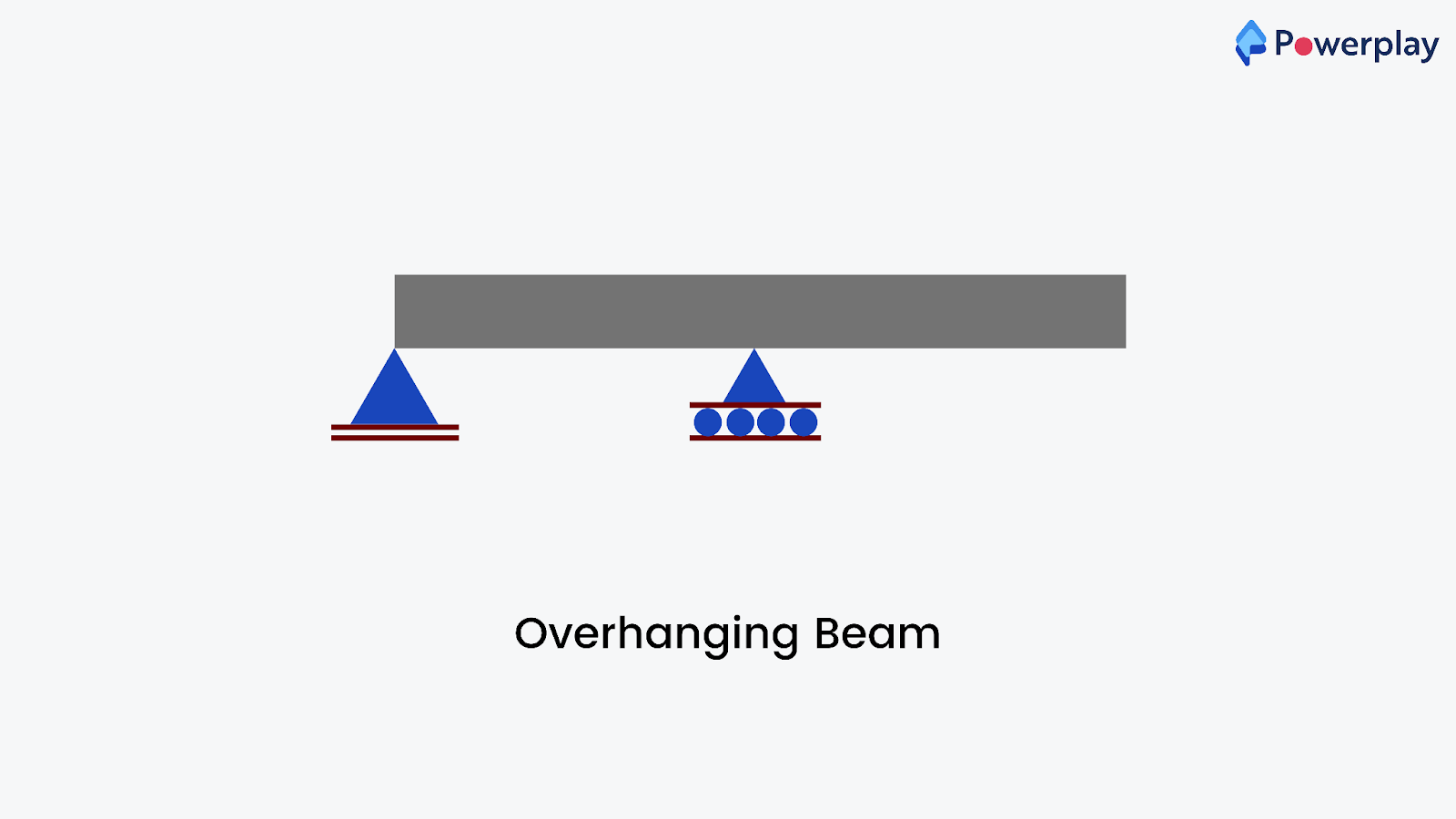 The overhanging portion causes an extra bending moment on both the supporting points in the beam. These are generally used in the construction of balconies or overhanging shades in residential buildings. The length of the overhang ranges from 40 cm to 120 cm. 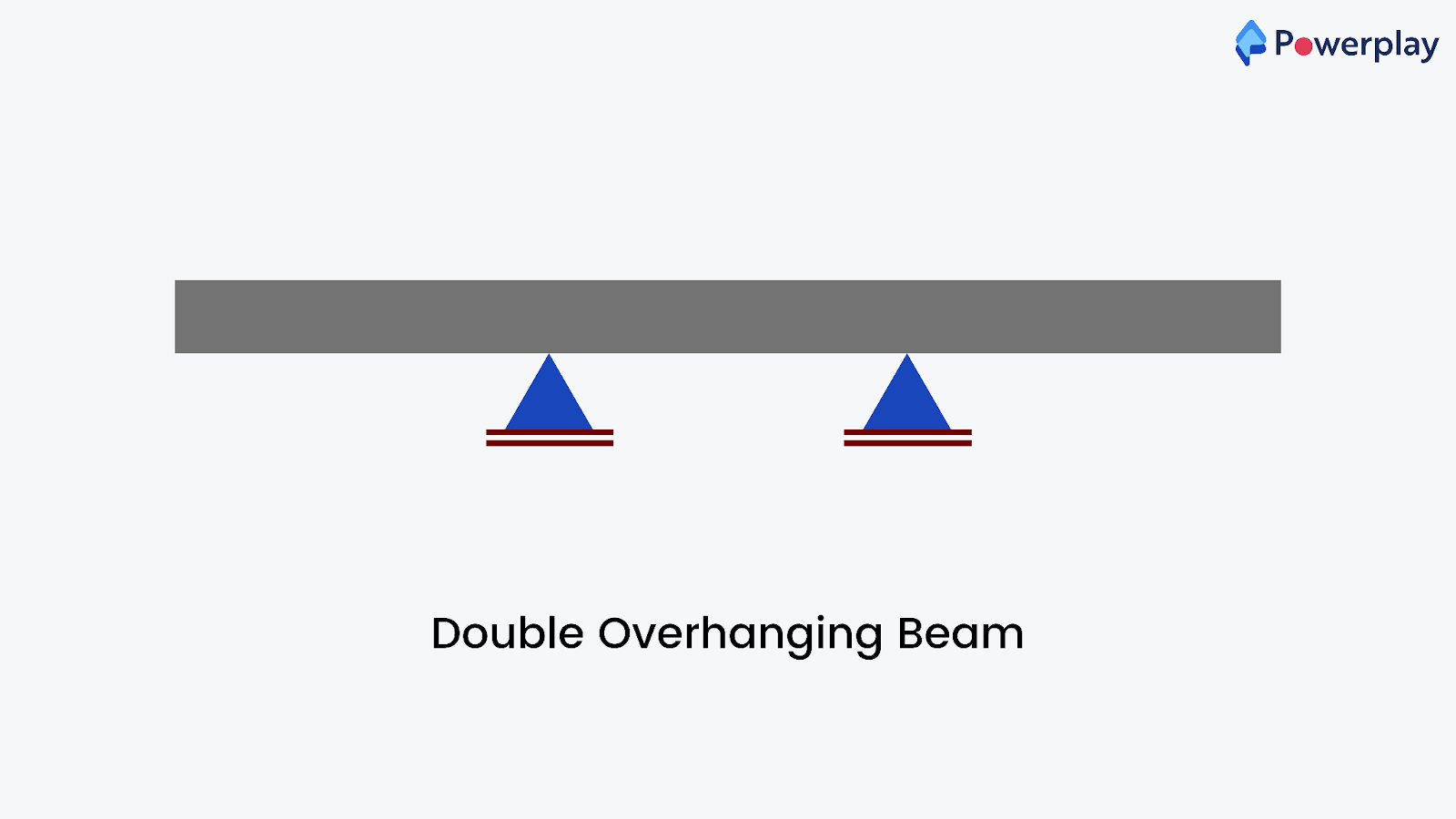 Both the supports in a double overhanging beam possesses rotational moment and can also have rollers as supports.

A trussed beam is formed when a normal beam is reinforced with a truss frame. Trussed frames are mostly used in the construction of warehouse and workshop sheds since these building structures need enough open space and longer spans. 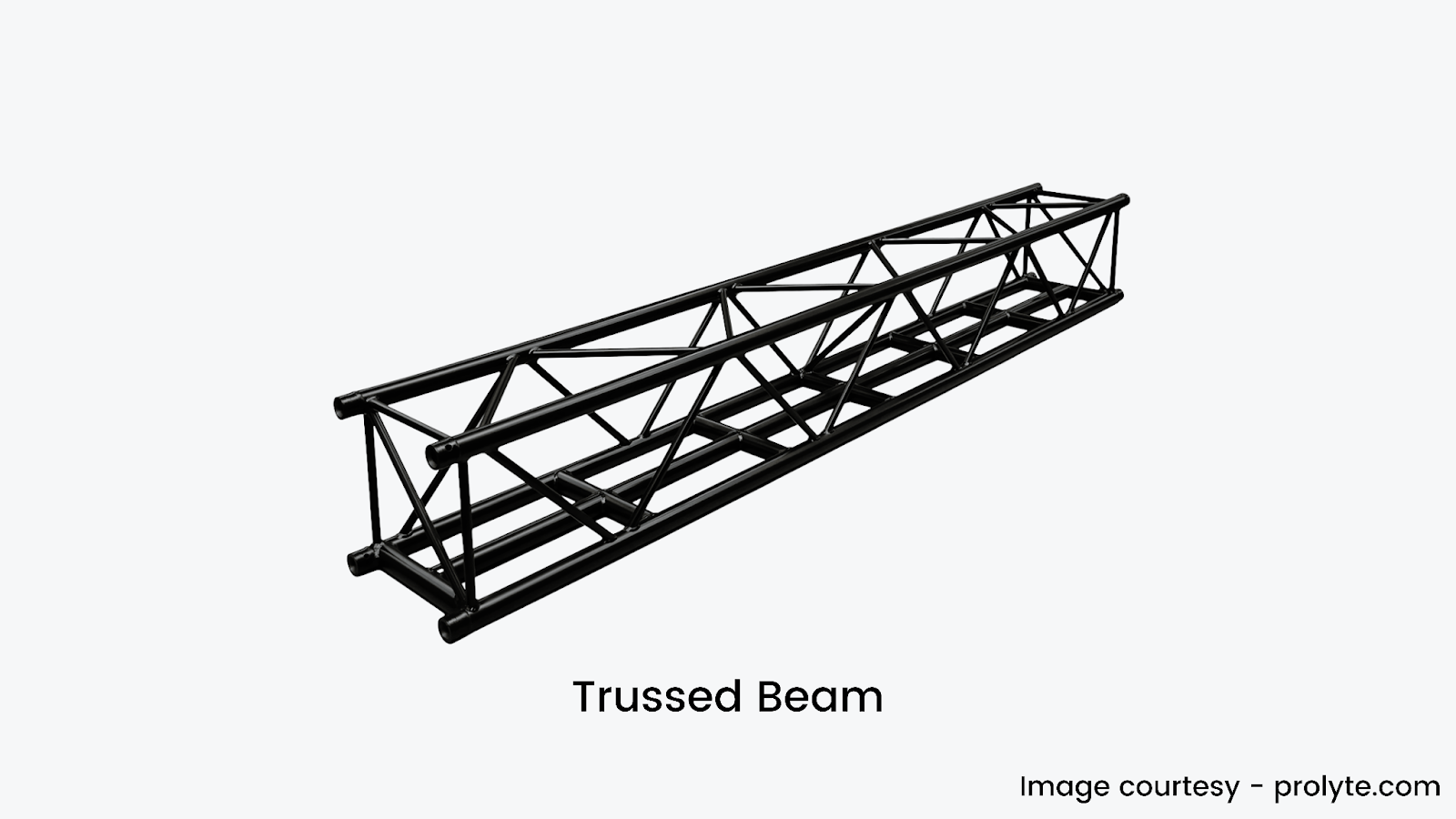 One of the most important as well as common types of beams to be used in present times is reinforced concrete beams. They primarily help in resisting transverse external loads which include shear forces, bending moment, and sometimes torsion across the length of the beam too. Steel beams are highly durable, strong and a good material to resist tension. They are manufactured by pouring molten steel into molds of different shapes and sizes. These beams are used to construct industrial buildings such as furnaces, workshops, ropeways, bridges, etc.

Timber beams are used in combination with wooden posts and columns in a wooden frame structure to support wooden roof trusses of wooden houses. Timber beams are generally provided horizontally in between two posts on both sides of a wooden truss.

With proper treatment, timber can prove to be a strong and durable material but in the era of concrete beams, the use of timber beams is very little.

As the name suggests, composite beams are developed using two different types of materials. The two materials are either joined or fused to act as a single unit. 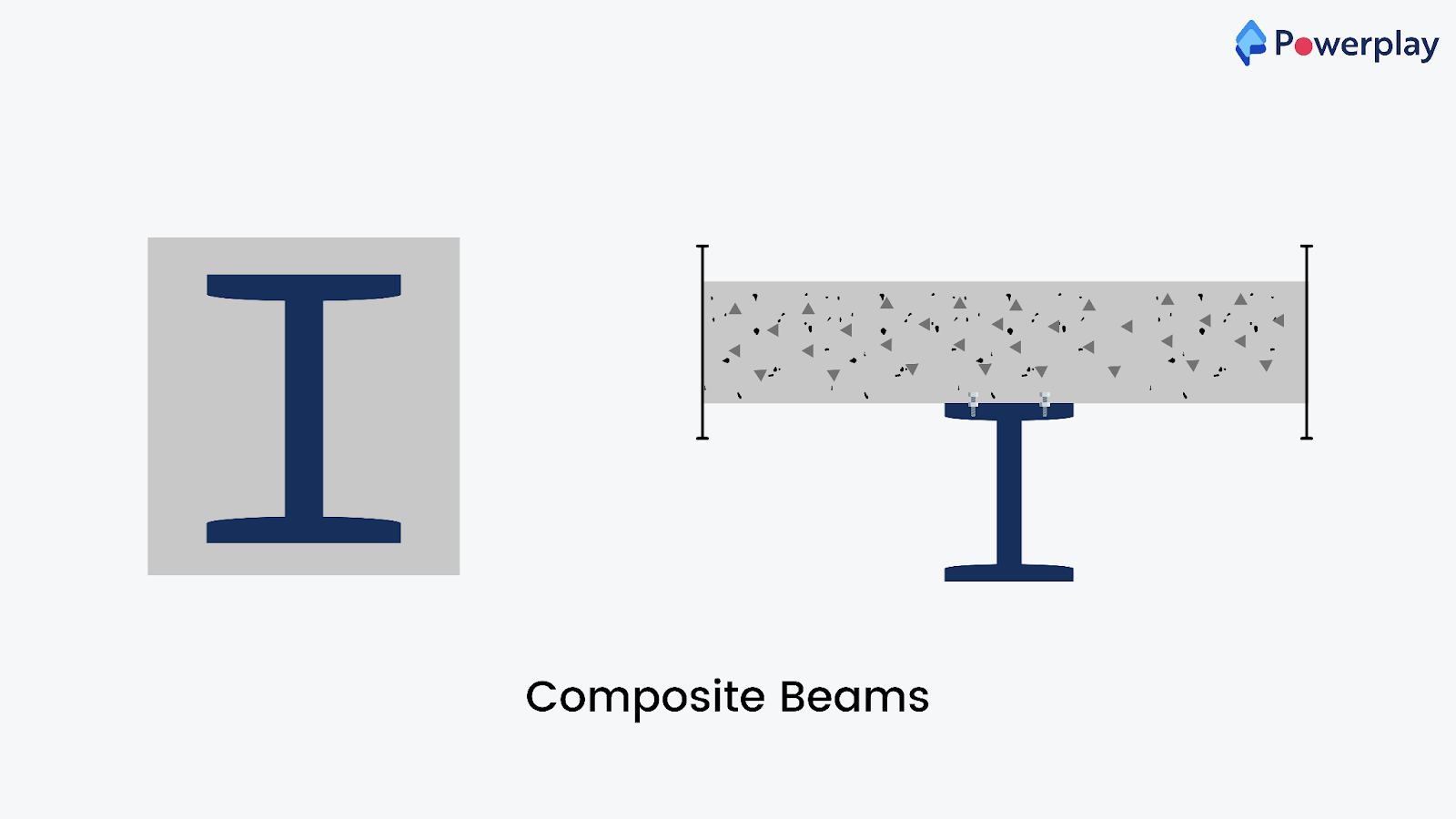 Based on Cross-sectional Shapes

Since tension acts at the bottom of a rectangular beam, steel reinforcements are generally provided in greater numbers at the bottom than at the top. They are one of the most commonly used beams in the construction of small residential buildings and high-rise buildings. 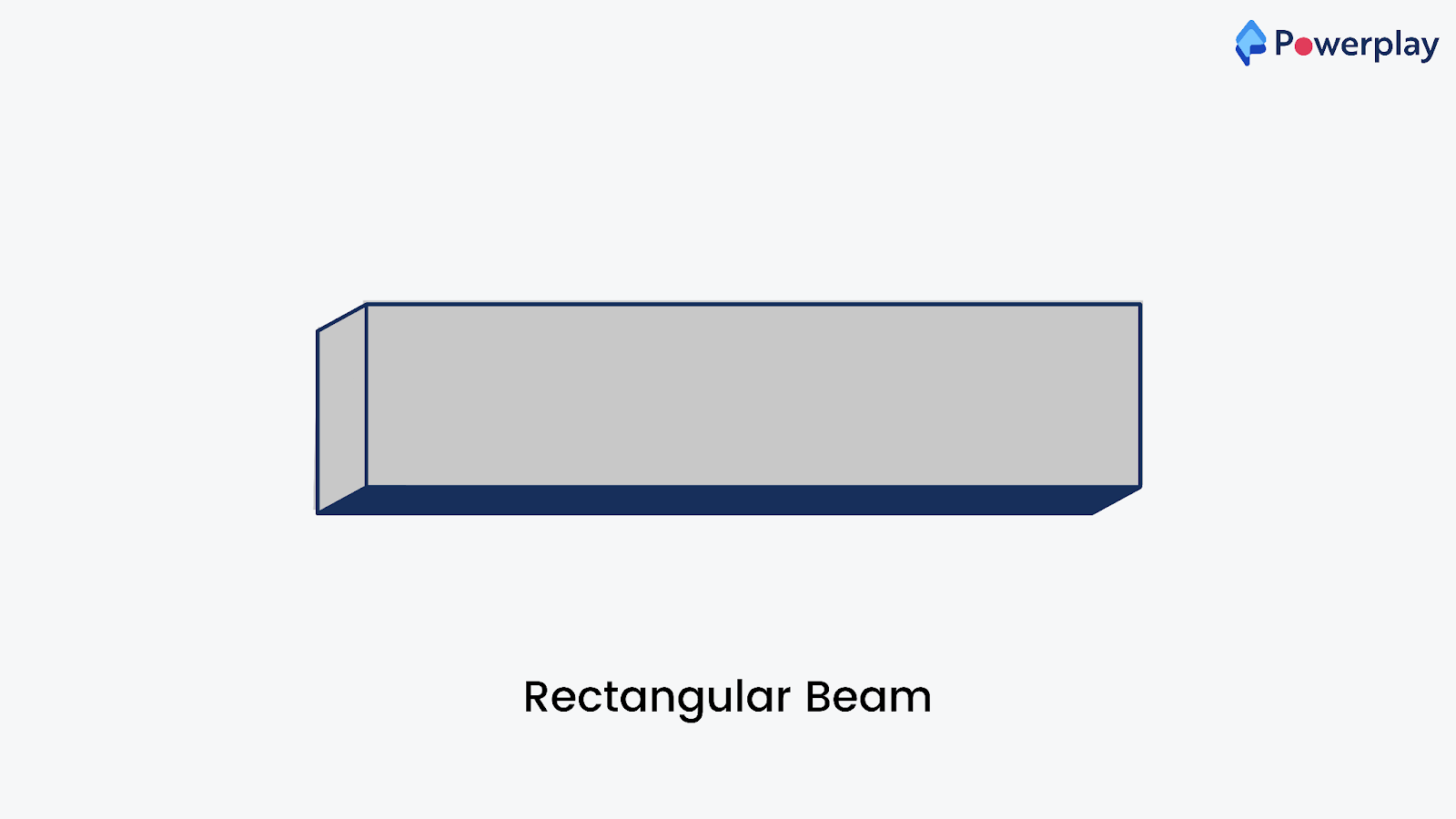 I–beam is an I-shaped beam usually made of steel in which the central web and two flanges at the top and bottom each. The deflection caused in I–beams are much less as compared to rectangular beams. 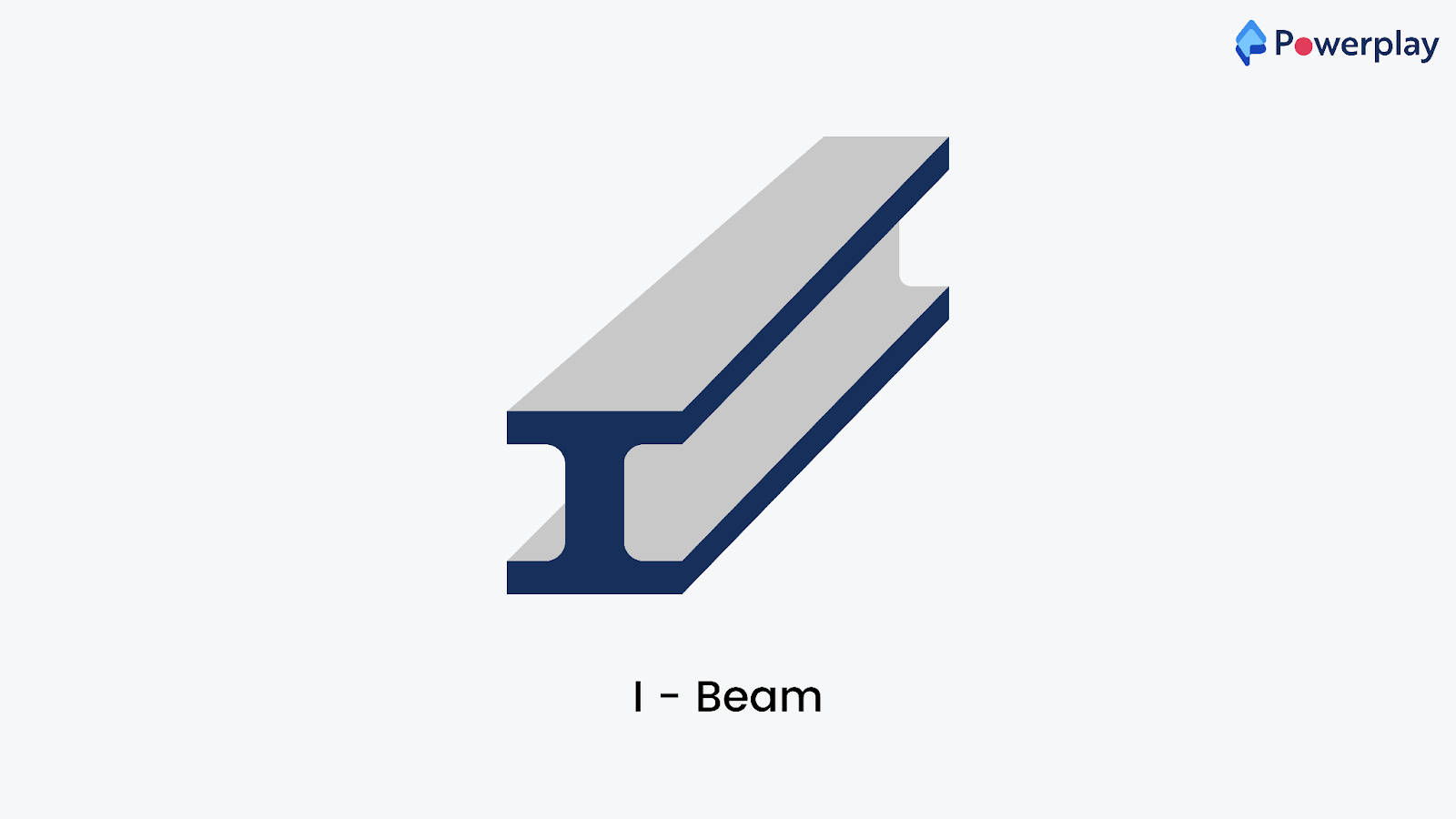 They are also made of concrete and fiberglass and are used in the construction of industrial buildings and multi-storied buildings. 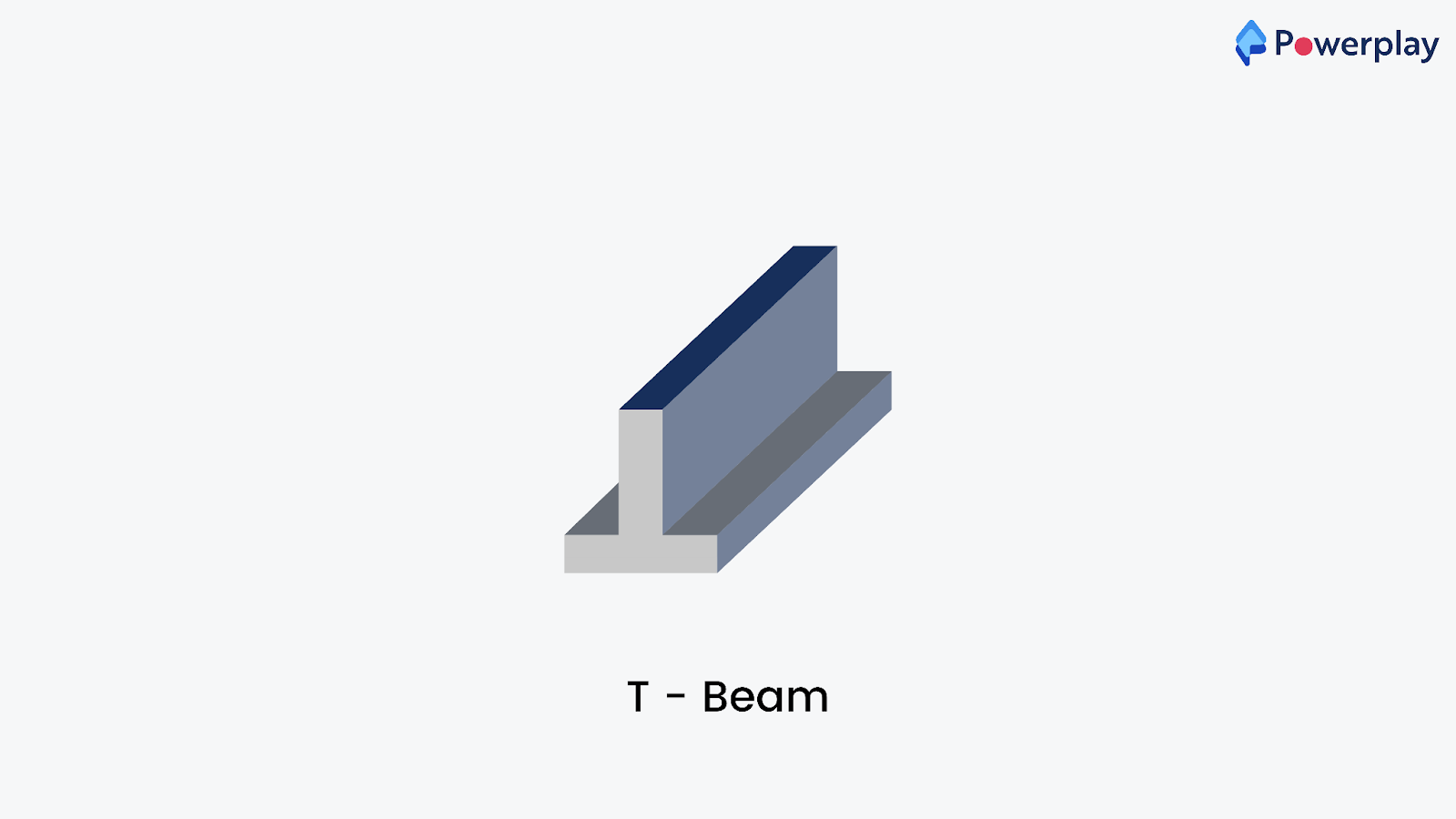 As compared to rectangular beams, T–beams can also be used more effectively for construction in larger spans, since the deflection is quite less.

C–beam is ‘C’ in shape and is also called a channel section. 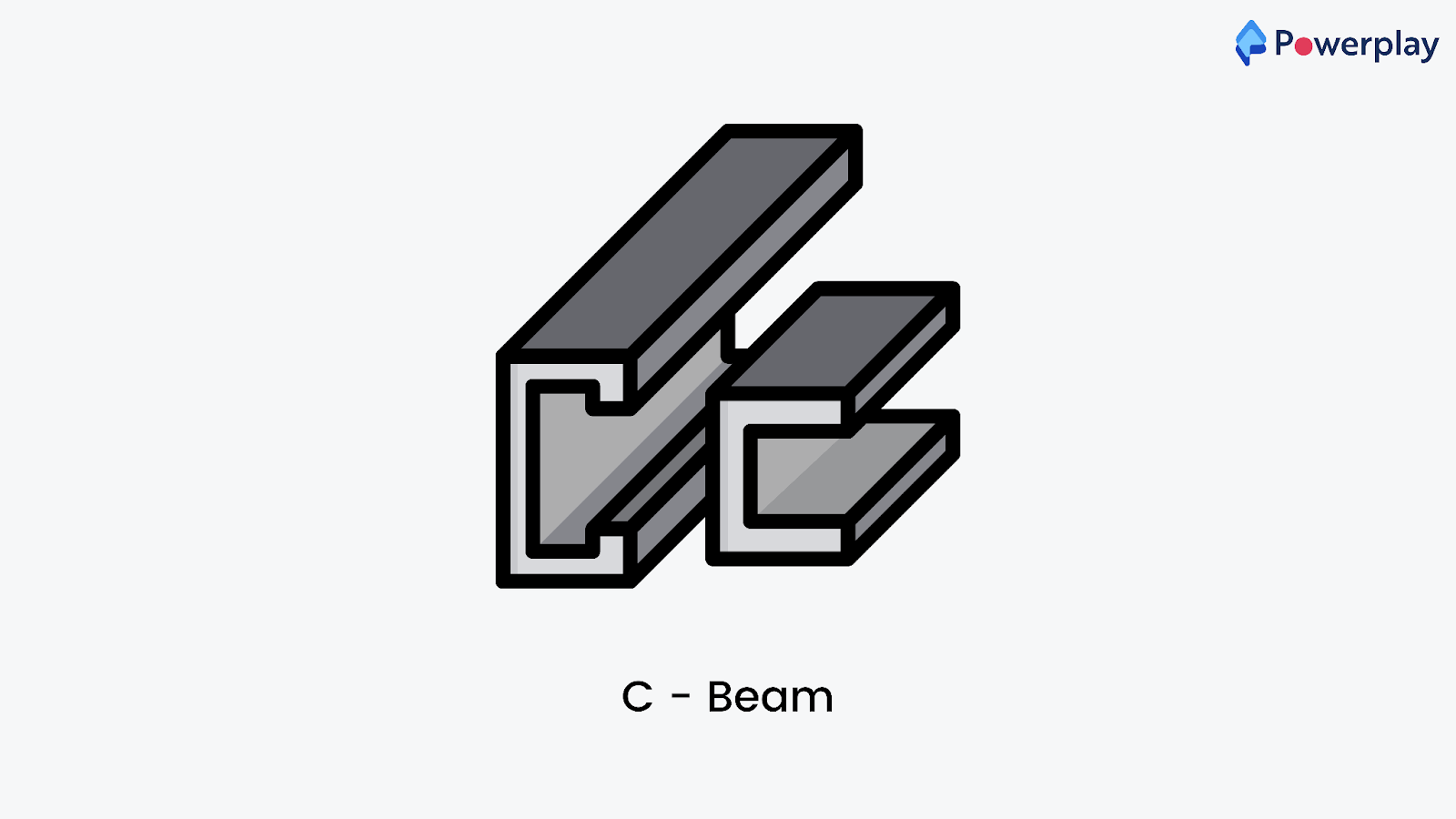 L–beam is in the shape of an ‘L’ which is provided at the corner or around the perimeter of a slab. L–beams can also be described as end beams that have slabs present on only one side. 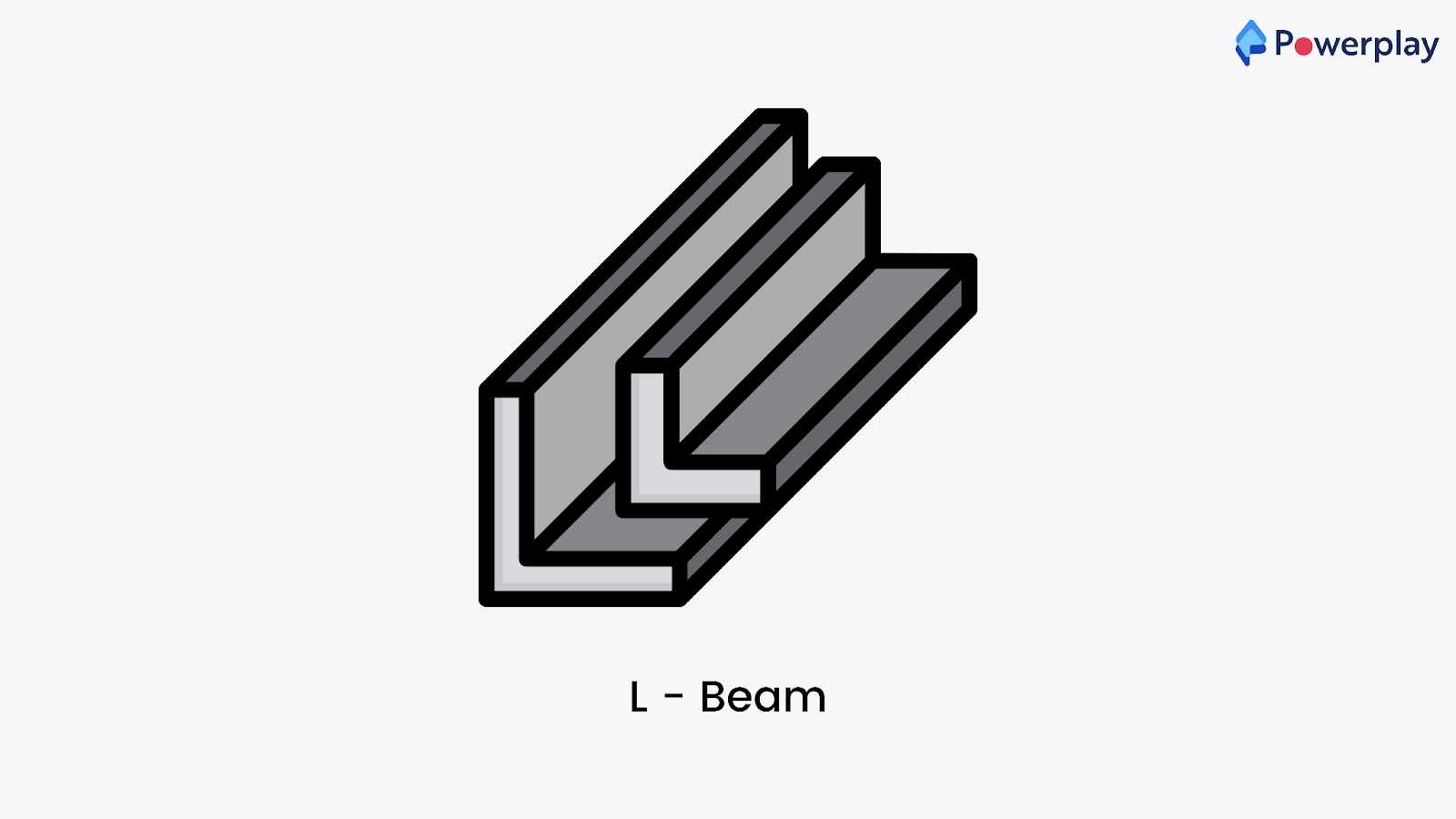 L-beams can be usually found at corners of buildings where the roof slab is not projecting out, at corners around staircases, and lift openings.

Statically determinate beams are commonly used in bridges because these beams do not get affected by temperature changes that induce large stresses in bridge structures.

Statically indeterminate beams are those in which the forces acting cannot be computed by using simple static equilibrium equations. The number of unknowns is greater than the number of simple equations being formed which thus requires the use of constraints equations. 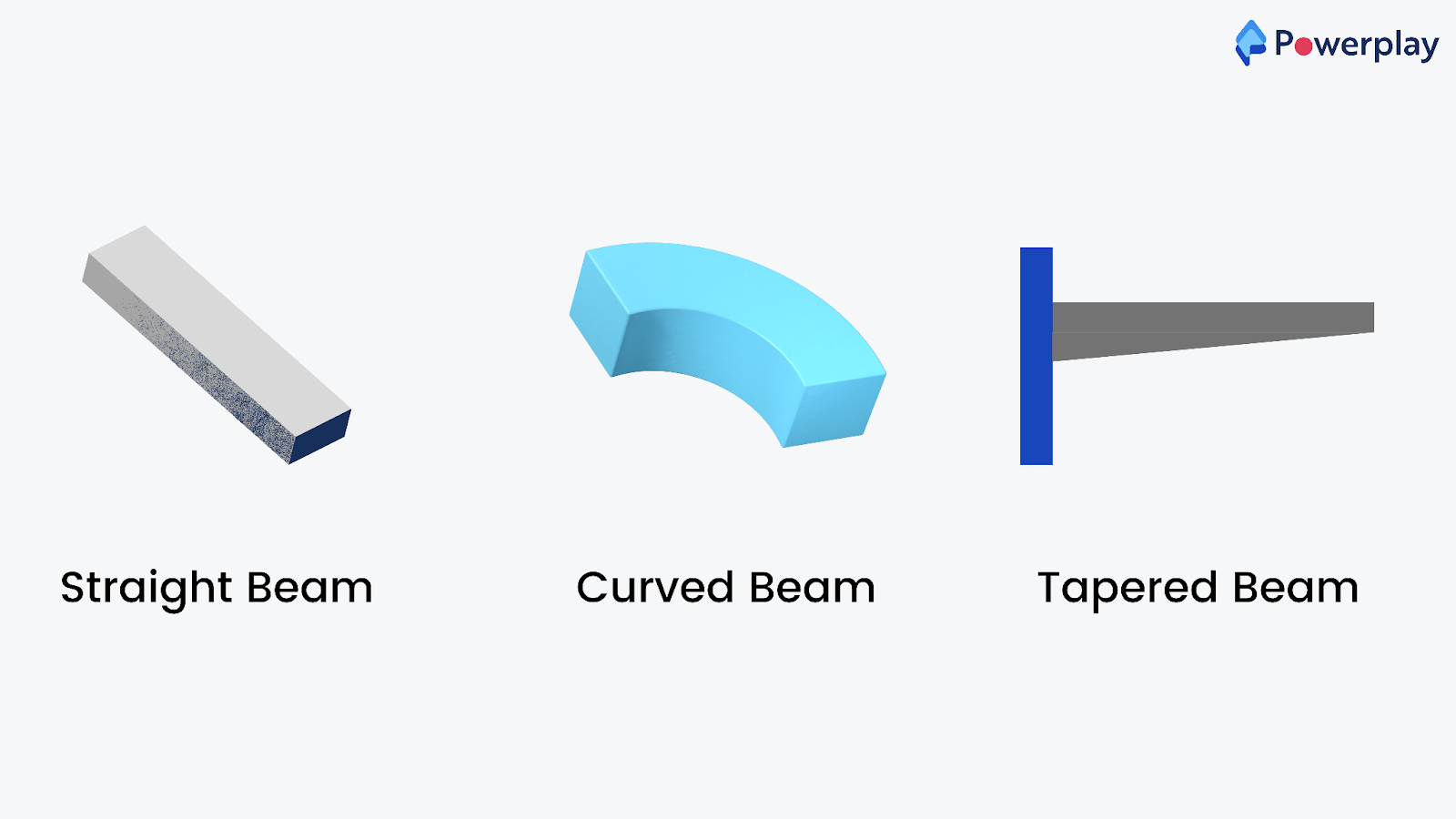 Beams having a straight profile are called straight beams which are one of the most commonly used beams for building construction.

Beams having a curved profile are called curved beams which are commonly used in circular or curve-shaped building construction.

Beams having a tapered shape are called tapered beams.

Based on Construction Methodology

These beams are cast and cured on-site are called cast-in-situ concrete beams. The beams are cast by pouring fresh concrete in fixed formworks of definite sizes and compacting by vibratory methods.

Precast concrete beams are fabricated in plants away from the construction site in a controlled environment. Ideal conditions are provided for the casting of these beams to guarantee maximum strength.

The casting and curing done in plants are monitored closely and checked for the best quality to avoid any flaws in the beams. They have to be transported with care to the construction sites.

Pre-stressed concrete beams, as the name suggests, are prestressed before the beams are cast. The tension wires in the beams are placed in formworks and pre-tensioned using hydraulic jacks at first and then the concrete is poured into the casts.

This method of pre-stressing beams allows beams to remain under compression more than tension even in their relaxed state.

Lintel beams have smaller dimensions as compared to other beams and are provided above doors, windows, and ventilation frames. These beams transfer the load acting on doors and windows to the wall below them through its sides.